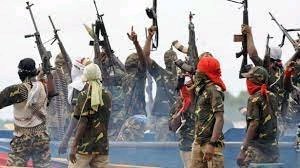 Ex-agitators under the Phase III of the Presidential Amnesty Programme (PAP) in Delta State have demanded for their guns and other weapons which they surrendered to the Federal Government in 2011.

The ex-militants are making the demand as a result of alleged failure of the FG to fulfill it’s own part of the bargain for the monthly payment of N65,000.00 stipend  to each member of the group.

Coordinator of the Phase III Ex-Agitators in Delta State, Gen. Marshal Atake, alleged that they were being excluded, continuously, from the monthly stipends by the Amnesty Office.

Atake said if the government cannot fulfill it’s obligation, their guns should be released back to them.

He lamented that since the 2011 documentation of the Phase III at JTF Headquarters Sector 1, Effurun barracks, Warri, the Amnesty Office has allegedly refused to implement the payment of the N65,000.00 monthly, adding that their colleagues in other states were being paid.

“We wrote severally to the Amnesty Office when Kingsley Kuku was there and had also written under Col. Milland Dixon Dikio as the administrator of the Presidential Amnesty Programme, but no success.

We are calling on President Muhammadu Buhari to give Dikio a marching order to include the Phase III ex-agitators in the monthly payment and all the programmes that other members benefitting from,” he said.

Other ex-agitators including Gen. Daniel Egole and Gen. Williams Emoghene in their separate statements, insisted on being paid their monthly stipends.

They said they were disarmed 11 years ago, and have not been paid a dime, asking why the discrimination when it was the same gun others dropped that they also dropped, urging the amnesty boss, Col Dikio to pay them their stipends.