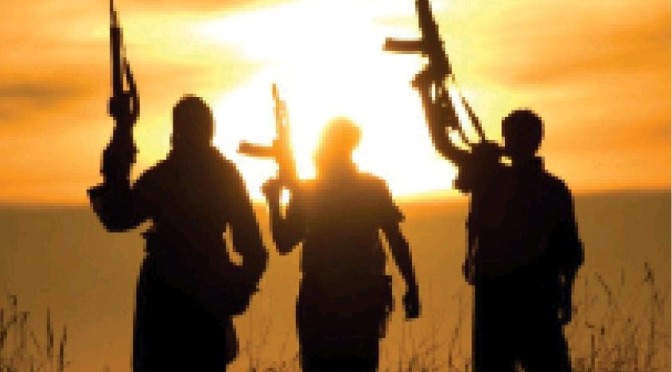 Oneworldnews learnt that the insurgents invaded the town on Sunday evening, shooting sporadically as the residents scamper for safety.

Our news line security source added that the terrorists are presently engaging the army formation in the community.

There is confusion in the community now, sporadic shooting currently going on, a source said.

ISWAP, which split from the mainstream Boko Haram in 2016, has become a dominant group, focusing on military targets and high-profile attacks, including against aid workers.

Since the death of JAS leader, Abubakar Shekau, the group has been consolidating its grip in locations around Lake Chad.

Just recently, it appointed Wali Sani Shuwaram, a 45-year-old as the new Leader (Wali) of ISWAP in Lake Chad.

The sect’s membership has swollen with the defection of hundreds of Boko Haram fighters under Shekau.

Gang up of ISWAP/Bandit have abducted six people at Kuregu Wusasa community in Zaria Local Government Area of Kaduna State.

Oneworldnews learnt that the Terrorist stormed the community about 10:30pm on Saturday, December 25, and conduct a house to house chase without being challenged by anyone.

Confirming the incident, the community leader of Wusasa, Isyaku Yusufu, said the kidnappers broke into the victim’s houses while they were sleeping and whisked them away.

They initially abducted eight people, but minutes later they asked a 15-year-old to carry a 4-year-old girl back home, he said.

According to our news line, the wife of a policeman, his daughter and four others were kidnapped during the raid.

Our source said that the Kaduna State Vigilance Service (KadVS) later responded to a distress call put across to them but the bandits were already on their way out with the victims.

As they (KadVS) arrived and engaged the bandits in a gun duel, they (bandits) ran away with the victims, it was later realised that the victims were from three different houses in the Wusasa area, the source said.

According to a legit source, Oneworldnews learnt that, the Imo State Police Command said a former governorship apirant in Imo State, Uche Nwosu, was arrested by the NPF not kidnapped by gunmen as earlier reported.

Mr. Nwosu is also the son-in-law of a former governor of the state, Rochas Okorocha.

The incident led to apprehension on Sunday as Mr. Nwosu was taken away by gunmen from a church service in his home town, Eziama Obieri in the Nkwerre Local Government Area of the state.

However, the spokesperson for the state police command, Michael Abattam, told Oneworldnews Reporters that Nwosu was arrested and not kidnapped.

Mr. Abattam, didn’t state the reason for his arrest, saying the police would soon release a press statement on the issue.

Yes, I can confirm to you that he was arrested and not kidnapped. Don’t worry, I will soon release a press statement on it, he added.

SaharaReporters had reported how Nwosu and his family were at St Peter’s Anglican Church on Boxing Day for a thanksgiving service when some gunmen in an Armoured Personnel Carrier and vans stormed the area.

They shot indiscriminately to scare people away before whisking the former governorship candidate away.

It was learnt that his security operatives could only watch as Nwosu was being whisked away.

Some residents had alleged that the state governor, Hope Uzodinma, had a hand in it but the state Commissioner for Information and Strategy, Declan Emelumba, has dismissed the allegation.

He described the allegation as ridiculous.