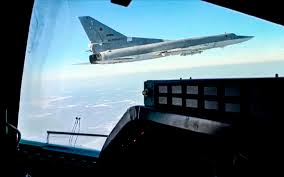 Three US Navy aircraft were intercepted by Russian planes in an “unprofessional” manner over the Mediterranean Sea last weekend, the Pentagon said on Wednesday (Feb 16).

While no one was hurt, interactions such as these could result in miscalculations and mistakes that lead to more dangerous outcomes, US Navy Captain Mike Kafka said in a statement.

He said the United States has “made our concerns known to Russian officials through diplomatic channels.

The US will continue to operate safely, professionally and consistent with international law in international waters and airspace, Kafka said. We expect Russia to do the same.

According to a US official who asked to remain anonymous, one of the Russian planes came dangerously close to a US aircraft.

The incidents come amid heightened tensions over Russia’s huge build-up of military forces along the border with Ukraine.

Russia’s deployment of troops, missiles and warships around Ukraine has being described as Europe’s worst security crisis since the Cold War.