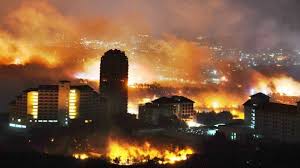 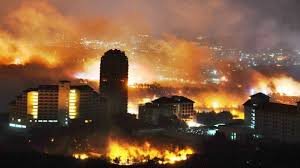 About 6,000 people were forced to flee their homes as the fire, which started on early Friday on a mountain in the seaside town of Uljin, spread to the nearby city of Samcheok and beyond.

Officials issued a severe fire hazard warning over the blaze, which has destroyed nearly 6,000 hectares of woodland.

There were no immediate reports of injuries or deaths.

As of Saturday afternoon, authorities had deployed more than 3,000 firefighters, as well as 57 helicopters and 273 vehicles, according to the Korea Forest Service (KFS).

The blaze had briefly threatened a nuclear power station and a liquified natural gas plant on Friday, but the facilities were now safe with emergency services deployed on site to keep them protected, officials said.

Of the thousands who fled their homes, nearly 700 had been able to return as of Saturday.

However, at least 116 homes have been destroyed, KFS said.

The national railway operator has suspended one of its train routes in the eastern coastal region.