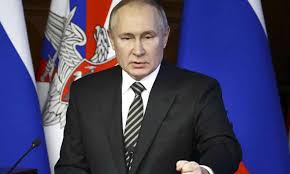 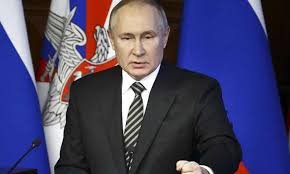 Putin commented on the country controlled Rossiya 24 news channel on Friday in which he called on neighbouring countries to think about how to normalize relations.

I want to emphasize once again. We have no ill intentions towards our neighbors, and I would advise them not to escalate the situation, nor to introduce any restrictions, he said, according to news agencies.

All our actions, if they arise, always arise exclusively in response to unfriendly actions against Russia, he added.

Putin also said, We do not see any need here to escalate the situation or worsen our relations.

Putin’s comments come more than a week after he ordered an invasion that has caused numerous casualties and sparked a growing refugee crisis.

The international community reacted with alarm when the Zaporizhzhia nuclear plant was reportedly shelled by Russian forces, who captured the facility on Friday.

The U.S. embassy in Ukraine tweeted that attacking a nuclear power plant constitutes a war crime.

As he spoke to mark a new ferry that would travel between its exclave of Kaliningrad and the rest of Russia, Putin also appeared to brush off the impact of sanctions imposed on his country.

We will just have to move some projects a little to the right, to acquire additional competencies, he said.

In the end, we will even benefit from this because we will acquire additional competencies.

President Joe Biden has imposed new sanctions on eight members of the Russian elite, while the U.S. joined forces with European allies in kicking certain Russian banks out of the international SWIFT payment system.

Foreign ministers gathered in Brussels on Friday to discuss what measures to take against Russia as it continues its aggression in Ukraine.