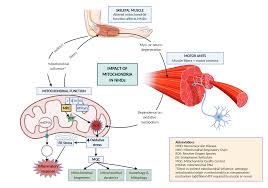 Centronuclear myopathy is a hereditary muscle disease associated with the incomplete development of muscle cells, which causes muscle weakness. There are three forms of the disease with different degrees of severity and patterns of inheritance which are X-linked, autosomal recessive, and autosomal dominant.

The conditions manifest themselves as defects in the cell structure of voluntary muscles, causing low muscle tone and affecting children and adults at various stages of life.

The most severe form of the disease is myotubular myopathy, inherited via the X chromosome. The term myotubular refers to the way the muscle cells in this disease are similar to immature muscle cells (myotubes) found in the fetus.

The irregular arrangement of muscle cells

In 1966, these muscle abnormalities were described by American neurologist AJ Spiro and his associates. In the following year, a research team led by JH Sher suggested the name centronuclear myopathy for all three forms of the disease. The term centronuclear refers to the combination of immature muscle cells and centrally-located cell nuclei.

In 1985, JZ Heckmatt and his colleagues confirmed that there were three distinct forms of centronuclear myopathy. Apart from the serious form associated with the X chromosome, there is also a less severe autosomal recessive form, and a milder autosomal dominant variant. In practice, boundaries are not always distinct and the disease can range from a form characterized by relatively mild symptoms to an extremely serious condition.

The overall incidence of myotubular myopathy is 1 in 50,000 male live births. The incidence of other centronuclear myopathies is extremely rare, with their only being nineteen families identified with CNM throughout the world.

The symptoms currently range from the majority who only need to walk with aids, from a stick to a walking frame, to total dependence on physical mobility aids such as wheelchairs and stand aids, but this latter variety is so rare that only two cases are known to the CNM “community”. Approximately 80% of males with a diagnosis of myotubular myopathy by muscle biopsy will have a mutation in MTM1 identifiable by genetic sequence analysis.

This is the most common form of myotubular myopathy and is caused by an error in the myotubularin (MTM1) gene which produces a protein called myotubularin. This protein is known to be required in muscle development, for the formation of adult muscle.

The mutation in gene DNM2 on chromosome 19 (19p13.2) is the cause of the autosomal dominant form of the disease. This gene codes for the dynamin 2 protein, which is involved in the formation of the cell membranes of muscles. This protein also affects an important system of channels, the T tubules, found in muscle fibers. The mutation usually results in a mild form of the disease, manifesting for the first time in late childhood or adulthood.

The autosomal recessive form may be caused by genetic mutations in gene BIN1 on chromosome 2 (2q14.3), which codes for the amphiphysin 2 protein. This protein allows dynamin 2 to regulate the formation of T tubules and the transportation of membrane proteins within the muscle cells.

The child often feels “floppy” and slack when lifted or carried

Weak eye musculature and a larger head than normal, with or without hydrocephalus

Pneumonia, respiratory failure can be life-threatening.

Muscle biopsy – This is done in one of two ways: either an open biopsy where a small piece of muscle is taken under general anesthetic or a needle biopsy is performed under local anesthetic to remove a small sample. The sample will be analyzed under a microscope. Muscle from people affected by myotubular myopathy shows a characteristic pattern, similar to that seen in fetal muscle. The nuclei are centrally located (hence the name centronuclear) instead of being at the outer edges of the fibers.

Molecular testing – This is only available for X-linked myotubular myopathy, testing for the dynamin mutation. DNA testing involves taking a blood sample and analyzing the DNA for the presence of a mutation.

The gene is either “read” from end to end, and this sequence is compared to a normal MTM1 sequence, or only certain sections of the gene are analyzed. This process can take up to several weeks to complete.

Prenatal diagnosis is available for families that are known to have a history of X-linked myotubular myopathy. Amniocentesis is traditionally performed at 15 to 17 weeks into the pregnancy. Using ultrasound to visualize, a needle is inserted through the abdominal wall, and a sample of the fluid surrounding the baby (amniotic fluid) is taken. Chorionic villus sampling (CVS) is carried out at 10 to 11 weeks. This involves taking a sample of tissue from the placenta.

Carrier testing – As with prenatal diagnosis, carrier testing is currently only available for families known to be affected by the X-linked form of myotubular myopathy.

Night-time ventilation – Breathing problems can occur with myotubular myopathy, and thus respiratory function should be regularly monitored. Night-time ventilation involves the use of a face mask attached to a small machine, which assists in breathing. This aids the muscles which control breathing and allows a greater intake of oxygen.

Feeding tube (or gastrostomy) – This is a tube that goes into the stomach through the stomach wall and enables a person to be given food and fluids by passing them directly into the stomach via the tube. People with myopathy may have problems with swallowing which can lead to choking and inhalation of food. This can result in chest infections. A feeding tube prevents this from happening.

Physiotherapy – The primary aim of an individual with a neuromuscular disorder is to increase or at least maintain function and mobility. Physiotherapy can assist in doing this, and it can also maintain breathing capacity, delay the onset of curvature of the spine (scoliosis), and help prevent the development of contractures.

Exercise – Moderate non-weight bearing exercise such as swimming, walking or peddling may be the best solution. This sort of aerobic exercise helps to maintain a healthy cardiovascular system and a steady weight.

Antibiotics – Chest infections are common with myotubular myopathy and complications with breathing can lead to a variety of other problems, including lethargy, headaches, and poor appetite. Antibiotics are used to treat chest infections.

As of 2004 there is no way to prevent the genetic mutations that cause myopathies, nor are there ways to prevent metabolic and endocrine failures that result in myopathies. Inflammatory myopathies often occur as a result of exposure to viruses or drugs, but it is almost impossible to predict their development