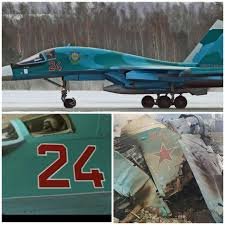 According to intelligent reporter it confirmed that the Syrians were seen celebrating on Saturday night as a Russian pilot involved in bombing raids on their country was reportedly shot down over Ukraine and captured by local forces.

Major Krasnoyartsev is believed to have been pictured alongside Vladimir Putin and Bashar al-Assad, the Syrian president, at Russia’s Khmeimim Air Base in north-west Syria, where the pilots were lauded as heroes.

In fact, Russian air strikes killed nearly 8,000 civilians, including 2,000 children and 1,200 women, according to the Syrian Observatory for Human Rights.

Ukrainian soldiers shot down a Russian Su-24 fighter-bomber near Chernihiv on Saturday morning, according to Ukrainian authorities.

The co-pilot was killed, but a pilot who gave his name as Krasnoyartsev ejected himself and was later found bloodied and bruised by Ukrainian troops.

During an interrogation, which was posted on social media, the Ukrainians asked him: You knew you were bombing a peaceful city, right?

Having given his name and saying that he belonged to the 8,689th unit, Mr Krasnoyartsev said: We’re not being told anything.

He was then asked how many bombing raids he had done on Chernihiv. Mr Krasnoyartsev replied: “It’s the first one in Chernihiv. Prior to that, we flew along the border.

Chernihiv, a town of 285,000 people located north of Kyiv, has seen at least 47 civilians killed by Russian bombers in the past few days.

News of his apparent capture spread across Syria on Saturday.

Hussein Akoush, who fled Aleppo during Russia’s bombing campaign on the city, told The Telegraph: I thought those pilots would ultimately get away with their crimes since it’s so difficult to identify them. But the Ukrainians have avenged for Syrians.

Not only killing pilots and capturing others alive, but by exposing their participation in Syria.

The 27-year-old added, Russian warplanes killed my family members, and speculated that the captured pilot could have been responsible.

Fared al-Hor, an activist and photojournalist from Aleppo, shared the news on Twitter, writing: After serving in Syria and killing, destroying and bombing many places under the auspices of the criminal Bashar al-Assad, this Russian pilot was captured by the Ukrainian forces after his plane was shot down in Ukraine.

Another Syrian, from a town on the outskirts of Damascus, said: The free Syrian people are finally getting their vengeance.