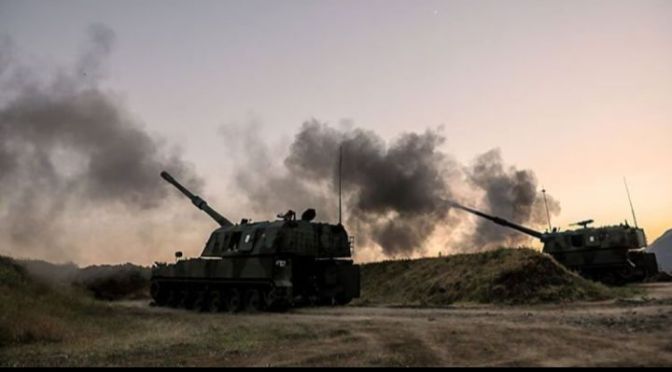 The Syrian Observatory for Human Rights has said that Turkish forces have shelled a Russian base and six villages in the country where separatist rebels are known to be operating from with Moscow support.

According to the report on Monday April 18th, Turkish forces used heavy artillery and missiles to bombard the base and homes in the villages of Qobor Al-Karajna and Al-Shaikh Ali villages and Al-Zaiban farm in Abo Rasen “Zarkan” countryside north western of Al-Hasakah.

As a result of the bombing many civilians have fled the area with drones being used to target specific positions including positions around the Russian base in Al-Mabaker. It is not known what damage if any was done to the Russian base and or its equipment.

Drones have also targeted an “Al-Natora” Assyrian checkpoint, which is affiliated to the Syrian Democratic Forces an alliance of militia that are working to overthrow the government.

The SDF was founded in 2015 , its mission ato create a secular, democratic and federalised Syria. Its primary opponents  are Islamist and Arab Nationalist forces who are supported by Turkey, as well as the Syrian Government which is supported by Russia. The SDF has in the past been supported by te West in their efforts to topple the Assad government.

The attack by Turkish forces is an escalation in the Syrian war, where Russian forces are there in support of the Syrian government.