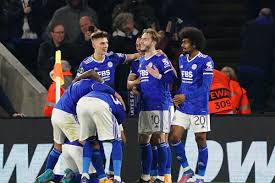 Leicester City’s performance in Thursday’s 1-1 draw with AS Roma in the first leg of the Europa Conference League semi-final will boost their confidence ahead of next week’s reverse fixture, manager Brendan Rodgers said.

Roma captain Lorenzo Pellegrini put his team ahead in the 15th minute before Gianluca Mancini scored an own goal in the 67th minute, sending in a cross from Leicester’s Harvey Barnes after coming under pressure from Ademola Lookman.

Rodgers said Leicester showed “courage” against Jose Mourinho’s experienced Roma at the King Power Stadium. The teams will meet in Italy for the second leg on May 5.

Our movement and mobility in the game was really good and we arrived into the final third in some really good positions, Rodgers told LCFC TV after the match.

Even though we were behind in the game, we weren’t giving away so much. We were aware, on the counter-attack, they might look to break away.

It was the reaction we needed from the team and I thought that reaction was very good.

Overall, I’m really pleased with the performance and it gives us great confidence now going into the second leg.

Mourinho said Roma gave away the ball too much after the first half and did not capitalise on some chances to counter-attack.

When we started to lose the ball and let the intensity drop, our defensive line dropped a bit and the game became harder for us in the second half, Mourinho told Roma’s website.

But, nevertheless, I am sure that before the game every Roma fan would have happily taken this result because it means everything will be decided at the Olimpico.

I am not smiling though because I know that even with 70,000 fans at the stadium it is going to be a difficult game.