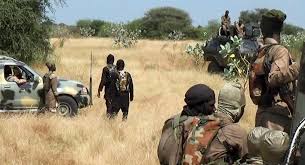 According to Homepage news channel it was learnt that eight soldiers including a Brigadier General, the Commanding Officer of the 93 Army Battalion Takum, Taraba State, were killed on Tuesday by terrorist.

The chairman of Takum local government area, Hon. Shiban Tikari. confirmed the incident to LEADERSHIP on phone when contacted.

Though Tikari could not give the details of the incident, he told our correspondent that himself and other security men were in the bush pushing ahead to recover bodies and other missing persons, who were on the convoy of the Army General when the attack took place.

An eyewitness, who refused to give his name for security reasons, said the incident occurred between Takum and Tanti village along Takum-Jalingo Highway.

The source said the Brigadier General was on his way to Jalingo on Tuesday when the incident happened.

Photographs of the slain sodiers were seen displayed as the gunmen dismembered their bodies with machete.

Although some of the locals, who spoke with our correspondent, said the GOC was still missing while some insisted that his body was among the corpses that were found so far.

Meanwhile, some persons suspected to be bandits on Tuesday at about 9pm threw an explosive inside the building of a military base, housing 6 Bridge, Jalingo, Taraba State capital.

The military building is located opposite Amazon along the Taraba State House of Assembly road.

Those who spoke to LEADERSHIP within the area said the bandits who threw the explosive were passing by on the road which is very close to the fence while they threw the object into compound of the military base.

A check at the base showed that there was no casualty as the time of this report.