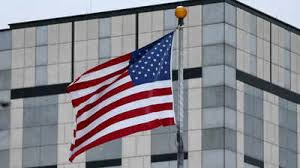 The U.S. Embassy in Kyiv has issued a warning that there is a greater chance that Russia may launch military strike against Ukraine on the days leading up to Ukrainian Independence Day.

The embassy once more urged Americans to leave as soon as they could.

The embassy issued a warning on its website, saying, The Department of State has information that Russia is ratcheting up plans to launch strikes against Ukraine’s civilian infrastructure and government buildings in the coming days.

The United States Embassy strongly advises U.S. citizens to evacuate Ukraine immediately using privately available ground transportation options if it is safe to do so,” the notice read, citing prior security warnings.

Due to an increased possibility of assault, Kyiv has banned any public celebrations in the city on Wednesday, the anniversary of Ukraine’s independence from Soviet rule.

Ukraine claimed that Russian forces fired rockets into a number of towns to the north and west of Europe’s largest nuclear power plant, which was taken by Russian forces shortly after they invaded Ukraine in February.

These towns are close to frontlines in the south of the country.

There have been calls for the area to be demilitarized due to artillery and rocket fire near the Zaporizhzhia nuclear reactor complex on the south bank of the Dnipro River.

Ukrainians who live close to the plant have expressed concern that one of the six reactors there could be hit by shells, which could have disastrous effects.

Naturally, we are concerned. According to Alexander Lifirenko, a resident of the nearby town of Enerhodar, which is currently governed by pro-Moscow forces, “it’s like sitting on a powder keg.