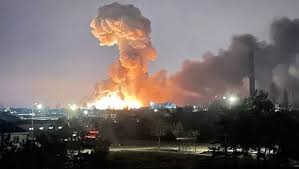 Russia is pulling all of its fighter jets out of Crimea in an apparent response to recent explosions at Russian military outposts in the region, a secret NATO report seen by Insider said.

Russia has already moved ten aircraft six Su-35S and four MiG-31BM jets out of Crimea and into Russia and is set to continue until all fighter jets are removed, the report, which was dated August 22, said.

The first ten jets were moved from Belbek airfield in Crimea to Kushchevskaya and Marinovka, two regions in Russia, the report said.

Russia has dispersed 10x fighter aircraft from Crimea to other airfields in mainland Russia to likely prevent further losses from Ukrainian attacks, the report said.

The report was referring to a series of apparent attacks in Crimea, the Ukrainian region that Russia illegally annexed in 2014.

Ukraine has not claimed responsibility for the explosions, though Ukrainian officials have suggested that it was involved.

Multiple explosions hit Saki airbase and Russia’s navy headquarters in Sevastopol, and Ukrainian President Volodymyr Zelenskyy has made it clear that his ultimate goal is to retake occupied Crimea.

As Insider previously reported, moving these assets farther from the front lines could make it harder for Russia to use them in operations in Ukraine.

Belbek airfield, which is near Sevastopol, is Russia’s primary airfield providing support in southern Ukraine and the Black Sea,” the NATO report said.

The report noted that at the time of its publication, 32 Russian fighter jets remained in Belbek airfield: They were mostly the Su-27 Flanker J fighter jets, but there were also a small number of SU-35Ss and MiG-31BMs.

These aircraft are likely insufficient to maintain the same level of air support in the region, the report said.

Russia has also increased the number of its tactical surface-to-air missiles in Crimea to defend against attacks by Ukrainian unmanned aerial vehicles, or drones, the report said.

Ukrainian UAVs are hard for Russia to target due to poor IADS (Integrated Air Defense System) C2, likely a weakness across the full spectrum of Russia’s armed forces’ efforts in the Ukraine conflict, the report said.