Thousands of supporters of Labour Party presidential candidate, Mr. Peter Obi, under the aegis of the fast-growing ‘Obidient Movement’ converged on strategic parts in Lagos.

From National Stadium, Surulere to Lekki, and from Ikeja to Festac area of Lagos, many of the supporters on Saturday morning were seen holding the posters of the LP candidate and his vice, Yusuf Baba-Ahmed, who had branded vests as they marched around and moved to the bridge leading.

The rally caused both human and vehicular traffic around the Stadium axis, from Alaka and Teslim Balogun Stadium and down to Ojuelegba.

Noting that the use of the stadium would avert unintended lockdown, The Third Force Movement, in a statement by Mr. Olawale Okunniyi, said without the approval the Organisers cannot stop Nigerians from using other venues like Gani Fawehinmi Park or Lekki Toll Gate. 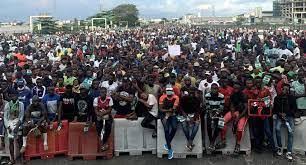 Hundreds of young Nigerians from all works of life have gathered at the popular Lekki toll gate where police brutalised citizens in 2020 during the #EndSARS protest.

Recall that the police had earlier warned that they’d arrest anyone caught within that space in the name of holding a rally.

They could be seen in a video that have surfaced online, dancing around and shouting “Obi Obi Obi.

Troops of the Nigerian Army have sacked Umunze community in Orumba South Local Government Area of Anambra State in what appeared as a reprisal attack following the alleged killing of five soldiers and two civilians in the area on Wednesday.

SaharaReporters had reported that seven persons including five soldiers were ambushed and shot dead on Wednesday around Zenith Bank area in Umunze town.
However, hundreds of troops were reported to have invaded the community, shooting indiscriminately, and injuring several people.

The military men sacked the community while burning some houses shops, according to sources.
The soldiers who also invaded Nkwo Market in area ordered the traders to close their shops, while shooting indiscriminately causing pandemonium as everybody ran helter-skelter seeking refuge.

Apart from the Nkwo Market and all the shops in that vicinity, all the schools in the area quickly closed as parents withdrew their children.

President General of the town, Chief John Akanyeonu, who addressed journalists in Awka on Thursday evening, said the soldiers had opened fire on his people when they stormed the crime scene at about 3pm, injuring some of the residents.

He said that one of the persons who were hit by the army’s bullets died while others were still struggling to stay alive in various hospitals.

Asked what the community was doing about the development, he said: “We have made some calls to the DSS office and the DPO here.

We have also called some top military officers and I think they are discussing with their colleagues to take it easy with our people.

All the schools around here were shut down. And there is no hope of reopening tomorrow. Because of their behaviour, people were so afraid, Akanyeonu further lamented.

Meanwhile, a trending video on the military’s invasion showed people running away to safety, everywhere deserted. The maker of the video also showed a pellet he picked from the Nkwo Market area.

Efforts to speak with the state Police Command were unsuccessful as the spokesman, Tochukwu Ikenga, could not be reached on telephone as his phone indicated reachable.

He was also yet to respond to text message.

The Secretary General of the United Nations has said that a possible expulsion of Russia from the UN Security Council is not the right step in the face of the tensions arising from the invasion of Ukraine and has emphasized that more diplomacy is needed.

I think that the secretary general António Guterres has said in the past that expelling countries from a global forum is not really the right step when we are talking about the need for more diplomacy, said the spokesman for the Secretary General of the UN, Stéphane Dujarric.

Thus, he stressed that the UN bodies will make the decisions they believe they should take in line with their procedures.

I think it’s a reminder to the world of the dangerous situation we find ourselves in. It’s a reminder of the need for all member states to respect international law, he argued.

Dujarric has stressed that Guterres has transferred his concerns to Russia regarding the procedures on the possible annexation of four Ukrainian regions the self-proclaimed republics of Donetsk and Lugansk, as well as Kherson and Zaporizhia scheduled for the day this very Friday.

Guterres himself warned Moscow on Thursday that this annexation has no place in the modern world and cannot be accepted, since it contravenes both Ukraine’s legal framework and international law.

Thus, he has warned that the supposed referendums on which this step is based lack legitimacy.

In response, Russia’s permanent mission to the UN has criticized Guterres, accusing him of double standards for a direct attack on the fundamental right to self-determination expressed by the population of the Lugansk, Donestk, Kherson and Zaporizhia.

Ukraine President Volodymyr Zelenskiy announced a surprise bid for fast-track membership of the NATO military alliance on Friday and ruled out talks with President Vladimir Putin, striking back at Moscow after it said it had annexed four Ukrainian regions.

Zelenskiy signed the NATO application papers in an online video clearly intended as a forceful rebuttal to the Kremlin after Putin held a ceremony in Moscow to proclaim the four partially occupied regions as annexed Russian land.

We are taking our decisive step by signing Ukraine’s application for accelerated accession to NATO,” Zelenskiy said in the video on the Telegram app.

The video showed Zelenskiy in combat fatigues announcing the membership bid and signing a document flanked by his prime minister and the speaker of parliament.

The announcement was likely to touch a nerve in Moscow which casts the NATO bloc at home as a hostile military alliance bent on encroaching on Moscow’s sphere of influence.

Before Russia sent its armed forces into Ukraine in February, Moscow was demanding legally binding guarantees that Ukraine would never be admitted to the U.S.-led transatlantic defence alliance.

Kyiv and the West say Moscow used this as a pretext, among others, to launch a pre-planned military campaign against Ukraine.

By applying for fast-track membership of NATO, Zelenskiy appears intent on showing Putin is failing in one of his main war goals preventing Ukraine joining NATO. 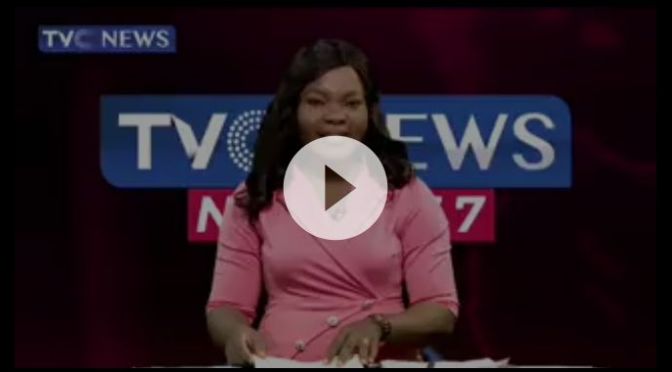 Peter Obi, a former Governor of Anambra State is one of the leading presidential candidates in the country.

He has been consulting with various political and religious leaders across the country since he declared his presidential ambition some months ago under the platform of the Labour Party.

Reacting after meeting Peter Obi, Governor Nyesom Wike stated on his official Twitter page that it was nice hosting the presidential candidate of the Labour Party.

The Governor of Rivers State is in a political tussle with the presidential candidate of the Peoples Democratic Party, Alhaji Atiku Abubakar.

His camp which includes some former and present Governors is seeking the resignation of the national chairman of the party, Senator Iyorchia Ayu.

The family of a British citizen who was allegedly taken to Nigeria in an act of extraordinary rendition has been granted a court hearing to challenge the UK government for not intervening in his case.

Nnamdi Kanu, the leader of the Indigenous People of Biafra (Ipob), a prominent separatist movement proscribed in Nigeria, was arrested in Kenya in June last year before being transported against his will to Nigeria, where he has been held ever since.

In July, the UN working group on arbitrary detention published an opinion that the father of two had been subject to extraordinary rendition and said he should be released immediately.

However, successive UK foreign secretaries, first Dominic Raab and then Liz Truss, before she became prime minister, have refused to take a view as to whether Kanu was a victim of extraordinary rendition.

The family has been granted a judicial review to challenge that refusal, arguing that its effect has been that no action has been taken to help him.

His brother, Kingsley Kanu, said: The British government is well known for its stance on human rights.

I believe it must be decisive when it comes to its decision-making about very serious violations of the human rights of British citizens abroad, especially when the facts are clear, as they are in my brother’s case, and when the UN has investigated and reached a firm conclusion that my brother was subject to extraordinary rendition. I am very happy that the court has agreed that a hearing is necessary to decide this important issue.

Kanu’s family claim he was tortured in Kenya and has been held in solitary confinement in Abuja since being transported there.

The UN working group referred the case to the special rapporteur on torture. It expressed concern that he had been denied treatment and medication for his heart condition and highlighted that solitary confinement in excess of 15 consecutive days is prohibited under the Nelson Mandela rules, international non-binding standards.

In a court filing concerning a parallel case brought by Nnamdi Kanu in Abuja, the Nigerian government denied torturing or mistreating him. It claimed that he entered Kenya unlawfully, having previously jumped bail in Nigeria, and so had no right to an extradition hearing.

In 2015, Kanu was arrested in Nigeria and charged with terrorism offences and incitement, after setting up a digital radio station, Radio Biafra, at his home in London.

Two years later he fled the country while on bail after an attack on his family home, which he claimed killed 28 members of Ipob. In January, he pleaded not guilty to terrorism charges.

The evidence available to date establishes that he has been subject to extraordinary rendition and torture or inhumane treatment, she said.

It is unacceptable for the UK government to continue to prevaricate on this issue.

We are glad that the court has now granted permission for this case to move to a final hearing.

Explaining her decision to grant a judicial review hearing, Mrs Justice Ellenbogen said: Such decisions/inaction are, in principle, reviewable and do not enter forbidden areas, including decisions affecting foreign policy.

The Foreign Office declined to comment while proceedings were active.